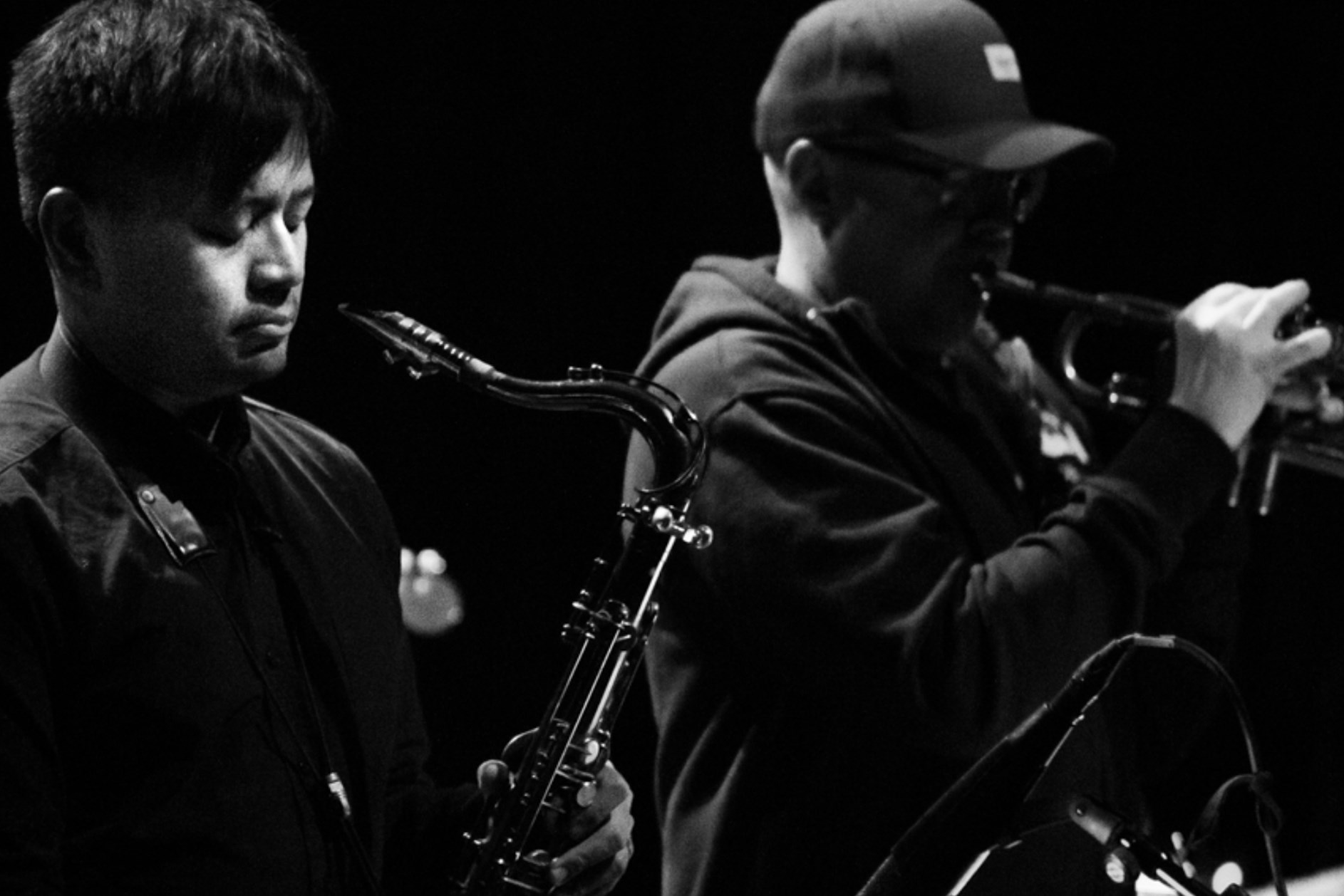 Posted at 11:46h in Press, Reviews by Jens Tytgat
Share

Following on from Martin Longley’s review of Porous Structures , this is the second of gig reviews from Brand! 2019 in Mechelen, Belguim

A notable highlight of Brand! 2019 arrived on the final night, with a band that brought together a supergroup line-up of Belgian, French, Norwegian, Swedish and American players. The Bureau Of Atomic Tourism is convened by drummer Teun Verbruggen, who is most familiar as a long-running member of the Flat Earth Society, but has also lately opened his own venue in the Anderlecht district of Brussels, Werkplaats Walter, where this band were to play the following night.

The Bureau Of Atomic Tourism. Photo credit: Geert Vandepoele
Verbruggen brought along his colleague from Warped Dreamer, the keyboardist Jozef Dumoulin, as well as Norwegian bassist Ingebrigt Håker-Flaten, French guitarist Julien Desprez, Swedish trumpeter Magnus Broo and US saxophonist Jon Irabagon. Just to read those names gathered together already released a rush of heady anticipation, suggesting a devilish linkage between hardcore improvisation, involved thematic shunts and untethered electric amplification. This band’s reality included all of those elements and more, as earplugs were offered at the venue’s gate-of-no-return, forgetting that this music was also going to operate within quietened zones of vestigial scrabbling, as riffs were found, pauses taken between Atomic floods.

Irabagon ignited his liquid tenor flow, cutting to Dumoulin’s swirling, effects-laden Fender Rhodes, as Verbruggen made splashing thunderhammer drum statements. All the players concentrated on an intense stippling section, dedicated to broken pointillist embellishment, with a high density of activity. There was a stuttering electronic attack, from those in the band so empowered, but this artificial spume led ultimately towards a haven of small sounds. Trailing tendrils latched onto dragging flesh strips, and these were the parts that could require earplugs, for the fainting portion of the audience.

A tolling doom-theme emerged, Desprez being markedly metallic, whilst the others savaged that linear terrain, and IHF peeled off his jumper, proceeding to build an obsessive bassline, Verbruggen getting into a rock pounding. Dumoulin released the samples on his Casio, having voices at one end, and scuzzed interference at the other, shaping a musique concrete pseudo-orchestral interlude that stood apart from most of the language used by his colleagues. For most of the time, Dumoulin had broken effects crystals over his Fender Rhodes, twinkling acidic rainbows that were intertwined with Desprez’s similarly overloaded pedal-clouds. The guitarist also used his instrument to deliver radically different sounds within an outburst, depending on whether he was chopping, thumping its body or picking fast runs in the ‘traditional’ rock-fusion fashion. The heavyweight combination of Broo and Irabagon set off high-blast horn fanfares, with the Swede being too high in the mix, (or was this just that his trumpet was aimed directly at your scribe’s forehead?).

All levels were engaged, making for a dynamic variety of density and sparseness, with the set being almost exactly the right length, extended enough to relish the avant grooves, yet not spilling over the rim into bad repetition. The pulses didn’t lose their grip, and the eruptions of abstract chattering provided unpredictable asides. This was a heavily sensitive group: inspired score-followers who knew how to ignore the notation, when that rebellious impulse took precedence.

THE BOAT (The Bureau of Atomic Tourism)