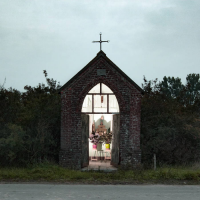 A tiny brick chapel in the gloom of dusk, double doors flung open revealing a bright interior of the edifice in the foreground of dark, dense foliage, on the cover of Still, the debut CD release of the Belgium-based piano trio, Donder. The imagery portrays to perfection the music of the group. Reflective and often minimalist, neat and lovely in its architecture, appealing in its apparent simplicity.

The set sounds like a suite in its straight-through cohesion—atmospheric and cinematic, a soundtrack to a late afternoon in late autumn, dark clouds looming in off the slate gray ocean, a lone figure walking up a grassy knoll to a small house that is lit brightly from within, with a thunder rumbling softly in the distance.