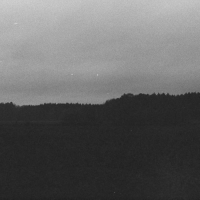 The Belgian piano trio Donder released their debut album in 2016. Entitled Still (Self Produced), the music is spacious and oddly beautiful, inspired in part by “cries and whispers of the world.” It proved to be an adeptly-crafted piano trio outing, remarkable for the mix of avant-garde sensibilities and an overall prediction of Donder’s dawning profundity. This from three men born in 1995, clocking in at twenty years of age apiece at the time of the recording.

Still painted tranquil pastoral atmospheres. The group’s sophomore effort, untitled album, employs a similar approach, and molds an entirely different mood. Still was warm, organic, unfolding in the natural world. Their second effort, recorded in a church in Copenhagen, echoes with the sound of an otherworldly starkness, a metallic resonance. Some of this derives from the inclusion of reedman Lars Greve; some may come from the recording space; and credit also could be given to subtle “extended techniques:” to wit, drummer Casper van de Velde‘s unorthodox percussion forays; bassist Stan Callewaert’s plaintive bowing; and perhaps some preparations on Harrison Steingueldoir‘s piano.

All this begins with the opening cut, “Lichaamloos.” If Donder had a desire to go Sun Ra-ian on us, they could weave a background tale of writing a soundtrack of an immense space habitat, ninety percent of its inhabitants frozen in a cryogenic sleep, their home revolving in slow majesty in the void over great sweeps of time in a vast emptiness, the bulkheads and internal workings deteriorating in the direction of decrepitude, groaning and rattling and rumbling in low tones at steady yet inexorable stresses. And if all that sounds esoteric—a recipe of random, mindless wanderings devoid any pleasing beauty—it isn’t. Accessible, pretty melody is a prime component of the sound, from pianist Steingueldoir and saxophonist (haunted by the ghosts of frozen passengers?) Lars Greve. So is sonic innovation.

The group Donder (the Dutch word for thunder) arrived with the presentation of Still, a top shelf piano trio outing. untitled album takes their art even higher.